The 2010’s was a decade that saw people who care about the State of Israel become activated in response to the obvious bias in British media against Israel along with the wave of antisemitic left wing activism.

In 2010 a flotilla of ships from Turkey attempted to break Israel’s blockade of Gaza ports. Israel had been accepting goods for Gaza through its ports in order to prevent arms shipments reaching its enemies. When the flotilla ships were boarded by Israel, nine people died and dozens were injured. Ten Israeli special services personnel were injured. Turkey tried to allow a door to be opened to let missiles into Gaza. Israel’s right to defend itself was questioned in Britain.

It was the year that US troops left Iraq and the Stuxnet virus was used against the centrifuges that Iran was using to refine weapons grade uranium.

In 2011 the so called ‘Arab Spring’ started in Tunisia. It spread to Egypt and many other Arab nations. Leaders fell. The ‘spring’ turned to ‘winter’ as the Syrian civil war began. NATO bombed Libya and the Libyan dictator Gaddafi fled and was found hiding in a water culvert. ISIS declared its Islamic Caliphate based in Syria and Iraq.

For Israel, Gilad Shalit, a young IDF soldier was freed after five years in captivity in Gaza. He was exchanged for 1,027 Gazan prisoners from Israeli jails. He had been captured through use of a terrorist tunnel at a checkpoint.

ISIS swept through Iraq and Syria. As the wars spread, hundreds of thousands were killed, minorities were raped and pillaged or driven into exile. In September 2013 chemical weapons were used by Damascus but the USA’s reaction was muted despite the red line crossed. It was Obama’s project to agree a deal with Iran. The deal on Nuclear arms was provisionally agreed on 24 November 2013. Syria and Iraq saw the ethnic cleansing of Christians and Yezidis from their ancient homelands, the open practice of racial and cultural hatred.

July and August were dominated by Operation Protective Edge, Israel against Hamas. A massive network of terror tunnels was discovered by the IDF changing and extending the conflict. 2000 rockets were fired into southern Israel in a 2 week period by Hamas from civilian areas against civilian targets. British media painted a picture of Israel as the bully of the Gazan Prison and public opinion was turned against Israel. All the atrocities of the other Middle East conflicts seemed to be brushed aside as Israel was vilified for defending itself against a sea of barbarism. The British Parliament voted to recognise the Palestinian State by an almost unanimous vote on 14/10/2014.

This was the year that terror struck Europe in the wake of the horrors of the Syrian and Iraqi civil wars. Islamic Fatwahs motivated attacks against European cartoonists who had created critical depictions of the prophet. In Paris on 7th January the Charlie Hebdo attack targeted journalists. 12 were killed and 11 injured by ISIS.

Aberdeen Friends of Israel was founded on the 8th June in response to protests against Jericho Cosmetics stalls in Aberdeen. Nisan Ayallon’s business had been driven out of Belfast and Glasgow by Marxist activists and now protests were mounting in Aberdeen.

Glasgow Friends of Israel set up a street stall in Buchanan Street on Saturdays to counter PSC stalls.

Agreement on the Iranian nuclear program was reached in Vienna on July 14, 2015. It came into effect in October.

COFIS the Confederation of Friends of Israel in Scotland was founded.

Paris became a battlefield in November when nine ISIS terrorists attacked the Stade De France and another venue. M70 assault rifles were used to kill 131 victims. 7 perpetrators were also killed. Brussels went into lock-down as the remaining terrorists were hunted.

The year saw further terrorism in Europe with 34 killed and 131 wounded in Brussels. In July the Nice truck attack and a Normandy church attack, also many stabbings.

The Brexit referendum result was partly influenced by fear of terrorist immigrants, and David Cameron resigned. Theresa May was appointed Prime Minister.

AFOI held its first conference in Aberdeen on 4th June.

An alleged coup attempt in Turkey was followed by a purge of secularists in many walks of life.

The new year opened with President Trump being sworn in, flagging a major change of US policy.

The Edinburgh Fringe included a bigger and better Shalom Festival.

The 100th anniversary of the Balfour Declaration was celebrated in October. The Albert Hall celebration was a significant event for London.

For Israel, President Trump failed to not recognise Jerusalem as its capital. This produced little immediate reaction, considering that presidents had been deferring this decision of Congress for fear of consequences. The move of the embassy followed speedily while Hamas upped the weekly Gaza protests.

The Pope requested that the ‘status quo’ be retained in Jerusalem after allegations of corruption in a deal over an hotel owned by the Greek Orthodox Church, bought by an Israeli organisation.

Israel celebrated the 70th anniversary of its foundation.

On 22nd September an Aberdeen conference was held on the Christian position on the State of Israel – The Everlasting Covenant.

On 4th December at Aberdeen University, Professor Meir Litvak gave a talk on Iran’s attitudes to Israel and Jews as dhimmis.

Netanyahu faced 2 indecisive general elections during the year under a threat of court action.

In the U.K. an order proscribing Hizballah, Ansaroul Islam and Jamaat Nusrat al-Islam Wal-Muslimin came into force at midnight on 1st March.

There was a hate crime in Aberdeen prior to the Stand Up to Racism march in Glasgow.

An Iranian tanker was boarded by Gibraltar; Iran attacked tankers in the Straits of Hormuz; hijacked a UK registered tanker and attacked a Saudi oil refinery.

The US concluded that Israeli settlements in Judea and Samaria do not violate international law.

The hate crime in Aberdeen resulted in a prosecution.

Over 12,000 signatures were gathered in support of the National Holocaust Memorial planned for the gardens outside the Westminster Parliament.

Boris Johnson was elected as PM with a significant majority and promised to ban BDS in public sector contracts. The election was a crippling defeat for the anti-Zionist Jeremy Corbyn leader of the Labour party and the Momentum left wing party-in-a-party which was accused of institutional antisemitism.

As this is posted in the first days of 2020 we see the death of Iran’s General Soleimani. What will the 20’s bring?

This film was shown in Aberdeen in August 2019 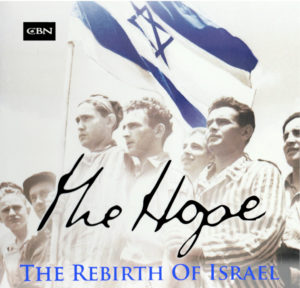 It is presented by Gordon Robertson of CBN and runs for 90 minutes. It is a documentary with dramatised scenes of the events leading to the establishment of the state of Israel.

Lance Lambert presents this documentary comparing the rise and fall of the British Empire with God’s Bible promise to bless those who bless Israel.

On 22nd September 2018 there was a conference at Bon Accord Free Church, Rosemount Viaduct.

“Amazing Christian speakers from various parts of the world discussing prophecy with a dive into Biblical scripture – featuring a Hebrew Scholar who opens up the Bible in a whole new way.This will take you from the comfort of your seats on a whirlwind tour of ancient history and ancient prophecies in the Middle East and into the relevant reality of Biblical prophecy in the modern day”

This is a stunning docudrama created by CBN, produced by Gordon Robertson.

We held this on Sunday 18th Feb 2018. It’s available on DVD from CBN www.cbneurope.com

2017 has been a significant year for Aberdeen Friends of Israel. Our Scottish city, so far North and West from Israel, is an active site of the ongoing Middle East struggle. Why should this be? What difference does that remote conflict make here? The reality is that what happens in Jerusalem is the focus of centuries of struggle and affects the entire world. In millennia past it was empires and enslavement, then religious rivalry and supremacists, but now in the 21st Century, added to the religious rivalry we have racism and political revolutionary ideology – a nasty cocktail.

The Christmas meme “Peace on earth and goodwill to all mankind” seems yet to be a dream, but as at Hanukkah, we intend to be a light to our city. Over the last year we have:

In March: supported a Schools Holocaust event and held an advocacy seminar.

In May: Aberdeen hosted the Israeli netball team and we made sure they were supported and welcomed.

In August: Supported and contributed to the Shalom Festival at the Edinburgh Fringe.

October: We had the WIZO Olive Trees paintings exhibition in Duthie Park, supported, visited, opened and closed by local politicians and dignitaries. The opening speech from Ross Thomson MP is HERE and Mr Nissan Aylon’s testimony of WIZO’s work is HERE

All year: We have been acting as victim support in two court cases of racial harassment, and helped Jewish Human Rights Watch monitor antisemetic protests in the city.

500 years ago Martin Luther nailed his statement to the church door;

How are these linked?

Film trailer on YouTube and DVD from AO Vision

Women and Their Olive Trees

Olive Trees are symbols of Peace

These trees live for hundreds of years. They are not touched during conflict because they will be the source of prosperity when peace comes.

An Olive Branch offered to an adversary is an offer of peace. After Noah’s flood, the dove brought back an olive branch – the tragedy was over.

In the community of Afula, Israel, the women have each painted their olive tree.

They were on display at Duthie Park Winter Gardens.